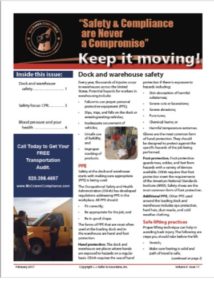 PHOENIX – Trucking companies should be on alert for an individual impersonating an Arizona Department of Transportation Enforcement and Compliance Division officer.

Earlier this month, a man identifying himself as an officer with ADOT’s Enforcement and Compliance Division contacted a Mesa-based trucking company saying one of its trucks was damaged in a crash and that the company needed to send payment for a mechanic called out to make repairs.

Inconsistencies in the suspect’s story led the company’s operations manager to suspect a scam.
END_OF_DOCUMENT_TOKEN_TO_BE_REPLACED

The Mining Safety & Heath Administration, reported 2016 as the lowest number of deaths ever recorded at our nation’s mines. Twenty-five miners lost their lives in work related accidents. This number is down from the 29 work related deaths recorded in 2015.

Nine of the 25 fatalities occurred in coal mines; four in West Virginia, two in Kentucky, and one each in Alabama, Illinois and Pennsylvania. The leading causes of death were powered haulage and machinery, which accounted for six of the deaths.

A total of 16 deaths were reported in metal and nonmetal mines in 2016. Mississippi and Texas led with two, followed by one each in Arizona, Arkansas, Florida, Georgia, Iowa, Kentucky, Michigan, Nevada, North Carolina, Tennessee, Utah and Virginia. The leading cause of death in these mines was machinery accidents, at four, followed by powered haulage, at three. All deaths occurred at surface mines.