Skip to content
First published by Safety+Health an NSC publication. 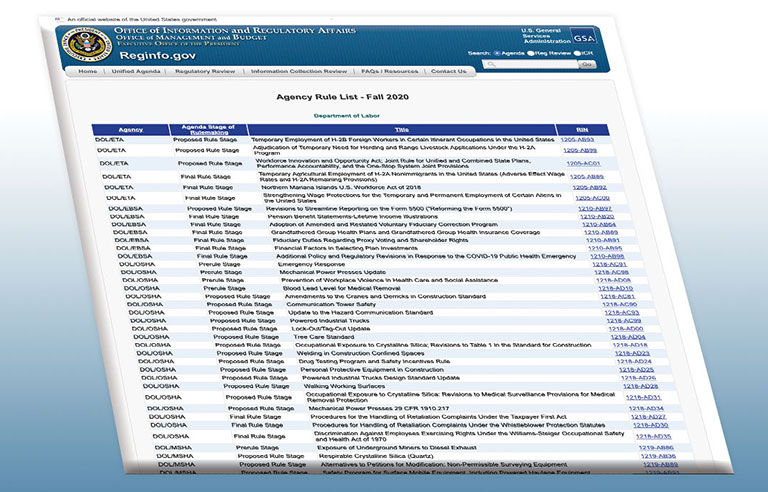 Washington — A potential infectious diseases standard from OSHA remains on the list of long-term actions in the Department of Labor’s regulatory agenda for Fall 2020 – the last under the Trump administration.

Released Nov. 9, the agenda – issued by the Office of Information and Regulatory Affairs twice a year – gives the status of and projected dates for all potential regulations listed in three stages: pre-rule, proposed rule and final rule. Listings marked “long term” aren’t expected to be worked on for at least six months.

That could change, however, if President-elect Joe Biden – after taking office Jan. 20 – directs OSHA to issue an emergency temporary standard on infectious diseases related to the COVID-19 pandemic. Such a directive would require the agency to then develop a permanent standard within six months.

Much of the rest of the agenda remains largely unchanged since the previous agenda was released July 1, although five OSHA regulations were finalized:

On July 10, MSHA announced no changes were made to the agency’s training requirements for refuge alternatives in underground coal mines, removing its only final rule from the agenda.

MSHA has one addition to the agenda: a proposed update and clarification to 30 CFR 50 – its rules on “notification, investigation, reports and records of accidents, injuries, employment and coal production in mines.”

The agency is seeking to revise the definition of “occupational injury/illness” to include “work-related.” It also seeks to review incidents that need to be reported within 15 minutes, noting in the agenda item that “the current list includes 12 types of accidents, and may be overly broad.” Also planned by MSHA is an accommodation of electronic reporting and recordkeeping, as well as a proposed attempt to “reduce recordkeeping and reporting burdens, to the extent feasible.”

OSHA’s standard on tree care operations has moved from pre-rule to proposed rule, and a notice of proposed rulemaking could be published in October. Another new item on the agenda is the proposed removal of 1910.217(g) from OSHA’s Mechanical Power Presses Standard, which requires the reporting of injuries resulting from mechanical power presses and the reporting criteria therein.

“There is a lack of evidence that OSHA uses this specific data,” which the agency states is already required under its Injury and Illness Recordkeeping Requirement Standard.

A new final rule listed would change the interpretation of the anti-retaliation provision of the Occupational Safety and Health Act of 1970, based on the Supreme Court’s opinion in University of Texas Southwestern Medical Center v. Nassar issued in 2013. In the case, the court held that defendants must prove in anti-retaliation cases that retaliation was the sole motivating factor for an adverse action such as a firing, instead of one of multiple motivating factors.

OSHA’s potential rule on workplace violence in health care and social assistance remains in the pre-rule stage, but a Small Business Advocacy Review panel is expected to convene in the near future, one of the next steps in the regulatory process.