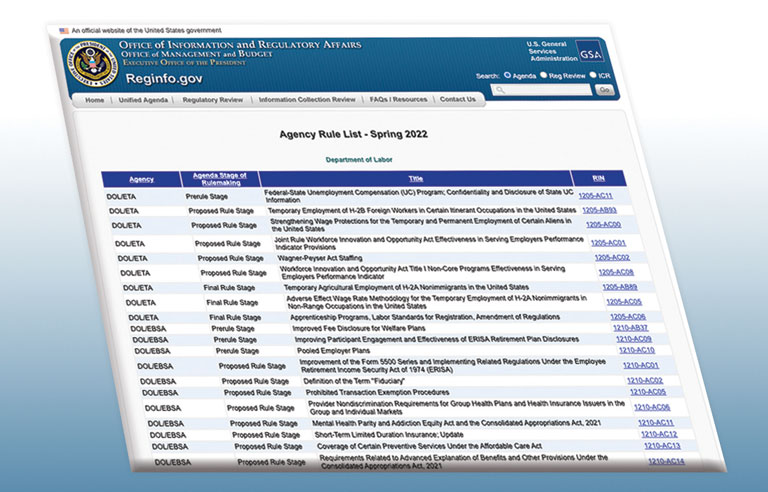 Washington — An update to OSHA’s Hazard Communication standard could happen as soon as December, according to the Department of Labor’s Spring 2022 regulatory agenda.

Published June 21, the agenda – issued by the Office of Information and Regulatory Affairs twice a year – provides the status of and projected dates for all potential regulations listed in three stages: pre-rule, proposed rule and final rule.

In this latest regulatory agenda, the HazCom standard update was moved from the proposed rule stage to the final rule stage.

OSHA’s current Hazard Communication standard (1910.1200) is linked with the third edition of the Globally Harmonized System of Classification and Labeling of Chemicals, also known as GHS. In February 2021, OSHA issued a proposed rule to update the regulations to align with GHS’ seventh edition.

Also listed in the final rule stage is a permanent COVID-19 standard for the health care industry. That’s expected to appear sometime in the fall, OSHA administrator Doug Parker and Labor Secretary Marty Walsh indicated in separate Congressional hearings in the past four weeks.

OSHA’s Infectious Diseases standard, meanwhile, is listed in the proposed rule stage, with a notice of proposed rulemaking slated for May at the earliest.

OSHA’s Emergency Response standard moved from the prerule to the proposed rule stage, and a notice of proposed rulemaking is not expected to appear until at least May as well. That regulation will attempt to “address the full range of hazards or concerns currently facing emergency responders, and other workers providing skilled support,” and provide performance specifications for protective clothing and equipment.

Meanwhile, the agency is reopening the rulemaking record on clarifying parts of its Walking-Working Surfaces standard. The agency planned to correct a formatting error in Table D-2 of that regulation and “revise the language of the requirements for stair rail systems to make them clearer and reflect OSHA’s original intent.”

The regulation was in the final rule stage in the Fall 2021 regulatory agenda, released Dec. 10, but is now back to the proposed rule stage.

OSHA’s attempt to revise Table 1 of its silica standard for construction was moved from the proposed rule stage to the list of long-term actions. That means the agency isn’t expected to perform any work on that standard for at least six months.

The Mine Safety and Health Administration had one change from the Fall 2021 regulatory agenda: A final rule requiring written safety programs for mobile equipment and powered haulage at surface mines or “surface areas of underground mines” could appear in October.