In case you missed the December 2019 News Release, The Bureau of Labor Statistics reported there were 5,250 fatal work injuries recorded in the United States in 2018. This represents a 2% increase from the 2017 count of 5,147. Although the total number of fatalities increased the rate per 100,000 Full Time Equivalent Workers remained static at 3.5.

Summary data from the report reflects many of the recurring topics we hear in the news and across social media including unintentional overdoses, workplace violence and suicide in addition to some of the recurring challenges we face year after year like transportation related and fatal falls, slips, and trips. 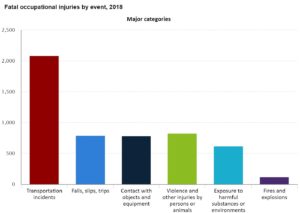 The Construction Industry reported the highest number of fatalities across all industries at 1,008 and the third highest rate (9.5) following Agriculture, Forestry, Fishing and Hunting (rate 23.4 count 574) and Transportation and Warehousing (rate 14.0 count 874) compared to rate across all industries of 3.5 per 100,000 Full Time Equivalent Workers. 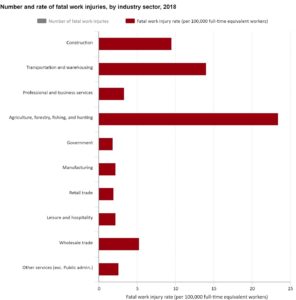 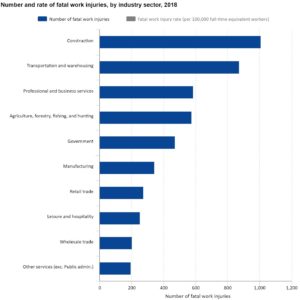 Within the mining industries, which has already reported its fatality data for 2019, the number of fatals dropped to 23 in 2019 from 28 in 2018. The total number of fatalities in 2017 were also 28.  Current information on fatalities and serious injuries can be found at https://www.msha.gov/data-reports/fatality-reports/search