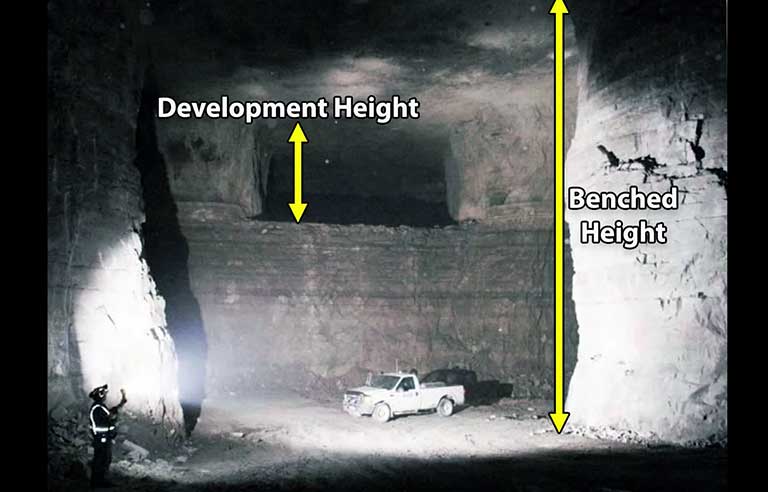 Photo: Mine Safety and Health Administration

A new video from the Mine Safety and Health Administration is intended to raise awareness of pillar collapses in underground mines.

Although no injuries resulted from four massive pillar collapses recorded by the agency since October 2020, the video urges mine workers and operators to take action to evaluate and address hazards common to pillar collapse incidents.

During the six-minute video, MSHA displays diagrams detailing how pillar collapses occur as well as footage of an air blast resulting from a pillar collapse in August.

The act of benching, or mining the floor, changes the overall dimensions of support pillars and often is a root cause of pillar collapses.

“After the floor is mined, pillars are taller than when they were initially developed, but their width remains the same,” the video states. “The result is a tall, slender pillar with a decreased ability to support the roof. The stability of tall, slender pillars can be further impacted by inadequate survey control, poor blasting techniques, weathering or geologic features.”

Pillars with an hourglass shape or showing recent rock spalling from the rib are at particular risk of collapse, the agency says. Dangers to miners include a fall of the roof, smaller rock falls and air blasts.

“Miners may be exposed to an air blast at great distances from the location of the pillar collapse,” MSHA says, citing haul roads, travel ways, crushers, shops, portal entrances and explosives magazines as areas that potentially may be affected.

Additionally, sink holes commonly result from pillar collapses and can pose danger to surface miners working above the collapsed area.

MSHA advises mine workers to listen for falling rock or sounds of the ground working, and report any concerns to mine management or the local MSHA office.

“MSHA will be reaching out to mine operators and discussing these hazards and best practices with miners,” the video states.