This year marks the 100th anniversary of the invention of the hard hat. The hard hat is one of the most recognizable pieces of safety equipment in the world. Hard hats were first worn by construction workers beginning in the 1920s. Over the years, hard hats have come to symbolize the strength of the construction industry and its workers.

Hard hats are designed to protect workers from head injuries due to falling objects or overhead hazards by reducing the intensity and distributing the pressure of impacts to the head. The E.D. Bullard Company, in San Francisco, California, was the first manufacturer to develop and sell hard hats that were used by some miners and laborers. At the time, Bullard referred to their product as the “Hard Boiled®” hat. In the early 1930s, electricians in Boston, Massachusetts, also began wearing hard hats. By the mid-1930s, construction of the Golden Gate Bridge began, and all workers were expected to wear hard hats [Carpenter et al. 2019].

During the ensuing 40 years, hard hats of various shapes and materials reached the market. These included hard hats made of steel, aluminum, canvas and resin, Bakelite®, and fiberglass. In each case, these hats were advertised as light, resilient, and cool while protecting the worker. In the 1960s, hard hats made of plastics such as polyethylene were sold. In the 1970s, when OSHA and NIOSH were created under the OSH Act, the use of hard hats was regulated as part of the head protection standard, and hard hat use significantly expanded [OSHA 2019]. As demand increased, more manufacturers produced hard hats, including MSA, Honeywell, 3M, and Kask [Rosenberg et al. 2010].

The hard hat has a rich history, but its design has remained fairly consistent over the decades, including a suspension system and outer shell. In recent years, safety helmets, similar to those worn in mountain climbing or ice hockey, have begun to be used on some construction sites to improve worker protections beyond that provided by the traditional hard hat. NIOSH is studying the performance and design of hard hats and safety helmets to improve overall personal protection with the hope of potentially reducing the likelihood of traumatic brain injury caused by falls and to save lives [Konda et al. 2016; Wu et al. 2017]. NIOSH researchers are also working to improve consensus standards that address hard hat performance. 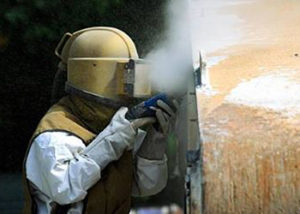 WASHINGTON, DC – The U.S. Department of Labor’s Occupational Safety and Health Administration (OSHA) has finalized its June 27, 2017, proposal to revise the construction and shipyards standards.

In a forthcoming rulemaking, OSHA will publish a proposal to amend the beryllium standards for construction and shipyards by more appropriately tailoring the requirements of the standards to the exposures in these industries. The proposed changes would maintain safety and health protections for workers, facilitate compliance with the standards, and increase cost savings.

Washington — OSHA’s Advisory Committee on Construction Safety and Health has scheduled a teleconference/WebEx meeting for Sept. 9 to discuss potential changes to beryllium regulations, according to a notice published in the Aug. 8 Federal Register.

“OSHA has evidence that exposure in these industries is limited to a few operations and has information suggesting that requiring the ancillary provisions broadly may not improve worker protection and be redundant with overlapping protections in other standards,” the agency states in a press release issued June 23, 2017.

Beryllium is a lightweight metal used in industries such as electronics and energy. It can be highly toxic when released into the atmosphere, where workers can inhale it. Exposure can pose serious health risks to workers, including chronic beryllium disease and lung cancer.

Requests to speak or present a written or electronic presentation during the teleconference are due Sept. 4.

ACCSH advises the Department of Labor and OSHA on upcoming standards affecting the construction industry and “the administration of safety and health provisions” in the Construction Safety Act.

WASHINGTON, DC – The U.S. Department of Labor’s Occupational Safety and Health Administration (OSHA) is requesting information and comment on Table 1 of the agency’s Respirable Crystalline Silica Standard for Construction. OSHA seeks information on additional engineering and work practice control methods to effectively limit exposure to silica for the equipment and tasks currently listed on Table 1. The agency is also requesting information about other construction equipment and tasks that generate silica that it should consider adding to Table 1, along with information about their associated engineering and work practice control methods.  Read more» 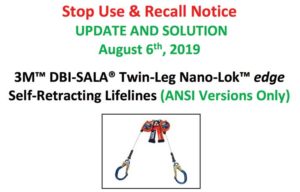 Red Wing, MN — 3M Co. has resolved an issue with the energy absorber on one of its recalled fall protection devices, the organization announced Aug. 6. The solution, however, is available only in regions that recognize ANSI standard Z359.14.

3M recently issued an immediate recall and stop-use alert for the DBI-SALA Twin-Leg Nano-Lok Edge and Wrap Back Twin-Leg Self-Retracting Lifelines. The energy absorbers on both devices were susceptible to not deploying in a proper manner, potentially putting workers at risk of serious injury or death, the alert states.

3M announced that it resolved the partial deployment of the energy absorber on its DBI-SALA Twin-Leg Nano-Lok Edge device, but that solution is limited so far.

“Due to regional regulatory requirements, this solution is currently available ONLY in regions that recognize the ANSI standard,” 3M states. “As other regulatory certifications are received, this solution will be made available in those regions. Until your unit has been repaired or replaced, the ‘Stop Use and Recall’ remains in effect and these units must be removed from service.”

The alert informs customers that the fall protection device is safe to use if it has a green check mark on the front label, adding that the mark means the unit “has either been repaired or has come from the factory with the revision and is certified for its intended use.”

3M is offering to repair or replace affected devices for free, or will issue a refund. To file a claim, go to nanolokedgerecall.com. Product numbers of affected devices are listed on the website.

Washington — Arizona’s dispute with OSHA – which at one point appeared to threaten its status as an approved State Plan – has officially ended, OSHA announced in a notice published in the July 26 Federal Register. Read more 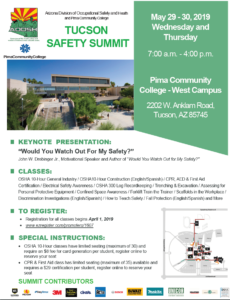 The U.S. Department of Labor’s Occupational Safety and Health Administration (OSHA) is requesting information as the Agency considers rulemaking to update the powered industrial trucks standards for general, maritime, and construction industries. The standards became effective in 1971, and were based on industry consensus standards from 1969. Since then, national consensus standards have been updated several times.

OSHA is requesting information on: the types, age, and usage of powered industrial trucks; maintenance and retrofitting; how to regulate older powered industrial trucks; types of accidents and injuries associated with operating these machines; costs and benefits of retrofitting the machines with safety features; and other components of a safety program. OSHA will use the information received in response to this request to determine what action, if any, it may take to reduce regulatory burdens and create jobs while improving worker safety.

Comments must be submitted on or before June 9, 2019. Comments and materials may be submitted electronically at http://www.regulations.gov, the Federal e-Rulemaking Portal, or by facsimile or mail. See the Federal Register notice for submission details.

Under the Occupational Safety and Health Act of 1970, employers are responsible for providing safe and healthful workplaces for their employees. OSHA’s role is to help ensure these conditions for America’s working men and women by setting and enforcing standards, and providing training, education and assistance. For more information, visit www.osha.gov. 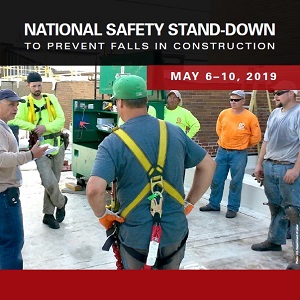 OSHA and its partners will host events throughout the country in honor of the sixth annual National Safety Stand-Down to Prevent Falls in Construction May 6-10, 2019. Employers and workers will pause to talk about fall hazards, OSHA compliance, and industry best practices to prevent falls. The 2019 poster is now available on OSHA’s publications page. 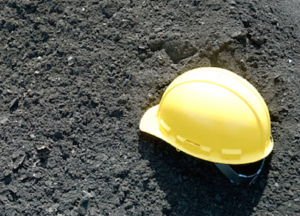 Accidental deaths are rising for workers at small construction firms while dropping for larger companies, a new report shows.

Between 2008 and 2016, the fatality rate for construction firms with fewer than 20 employees rose 57 percent, according to the study by CPWR – The Center for Construction Research and Training. In contrast, fatalities at firms with 20 or more employees dropped 30 percent. Read more»