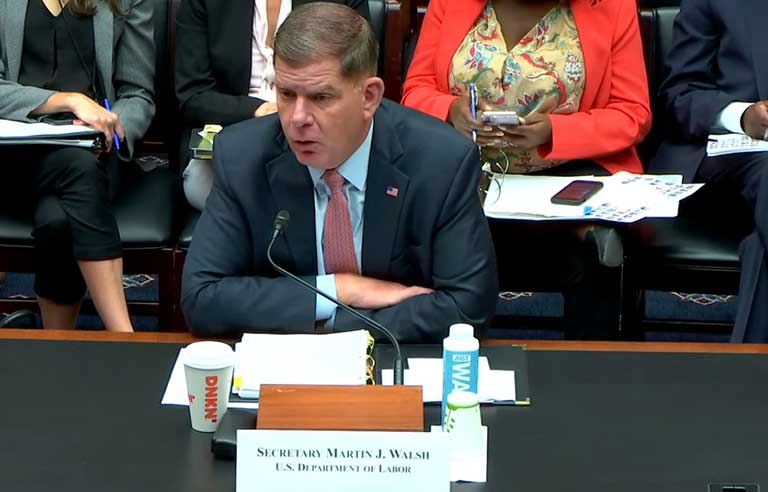 Washington — Echoing comments made by OSHA administrator Doug Parker during a hearing three weeks earlier, Labor Secretary Marty Walsh said a permanent standard on COVID-19 for the health care industry may be published sometime in the fall.

Walsh testified before the Senate Labor, Health and Human Services, Education, and Related Agencies Subcommittee on June 15 – a day after appearing before the House Education and Labor Committee.

During the June 15 hearing, Sen. Patty Murray (D-WA), chair of the subcommittee, asked Walsh for an update on the forthcoming permanent standard. OSHA withdrew the non-recordkeeping parts of its emergency temporary standard for COVID-19 focused on health care workers Dec. 27 – around six months after it first went into effect.

“I believe it will be done in the next three to six months.” Walsh said.

“Yes. It’s the rulemaking process,” Walsh responded. “I would love to speed it up, but, unfortunately, it’s the process that’s in place that we have to work under.”

Walsh also noted that OSHA is continuing its work on a standard on infectious diseases. According to the Department of Labor’s latest regulatory agenda, issued Dec. 10, that standard would be aimed at the health care industry and other “high-risk environments.”

The Office of Information and Regulatory Affairs is expected to publish an updated regulatory agenda in the near future.

During both hearings, Walsh highlighted a recent increase in mine worker fatalities. The labor secretary told Sen. Shelley Moore Capito (R-WV) and Rep. Teresa Leger Fernandez (D-NM) separately that his department had a call with “some of the major mining companies in America” to talk about sharing best practices on safety.

According to the Mine Safety and Health Administration, 37 mining fatalities were recorded last year – up from 29 in 2020. As of June 15, the agency had reported 12 miner deaths this year.

“Something I did when I was the mayor of Boston when we had high shootings is we brought all the stakeholders to the table. We did the same thing with the mining industry,” Walsh told Capito. “We need to make sure we stay on top of it.”