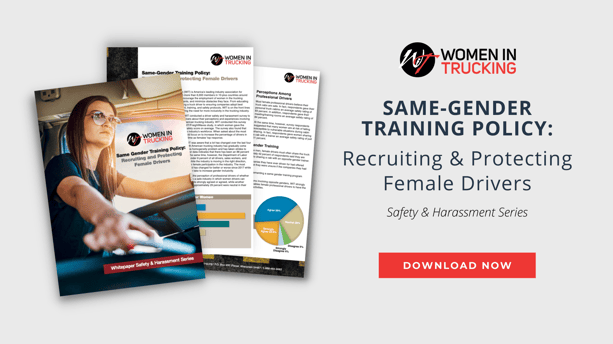 After receiving their commercial driver’s license, aspiring professional drivers typically accompany an experienced one on their route to become more confident, safer, and capable on the road, according to Ellen Voie, president and CEO of WIT. This not only could mean working exclusively with a stranger in close quarters for long hours during the day, it also means the potential of needing to sleep in the same vehicle, said Voie.

Some of the whitepaper outlines perspectives drivers hold specifically on same-gender training and its impact on female drivers in the industry. WIT conducted a driver safety and harassment survey to gain an understanding from professional drivers about their perceptions and experiences involving safety and harassment in the North American trucking industry. More than 430 professional drivers completed the survey from July through Sept. 2021.

The WIT survey found that while most drivers believe their truck cabs are safe, they also indicated knowledge of women falling victim to harassment or assault while sharing a cabin. “The Women In Trucking Association continues to press hard for companies to develop corporate policies that could help significantly shift this trajectory,” said Voie. There are a number of corporate policy recommendations on same-gender training that Voie recommends:

This whitepaper is the first of a series focused on safety and harassment issues for women in the transportation industry. To download a copy of the whitepaper, click here: womenintrucking.org/safety-harassment-series