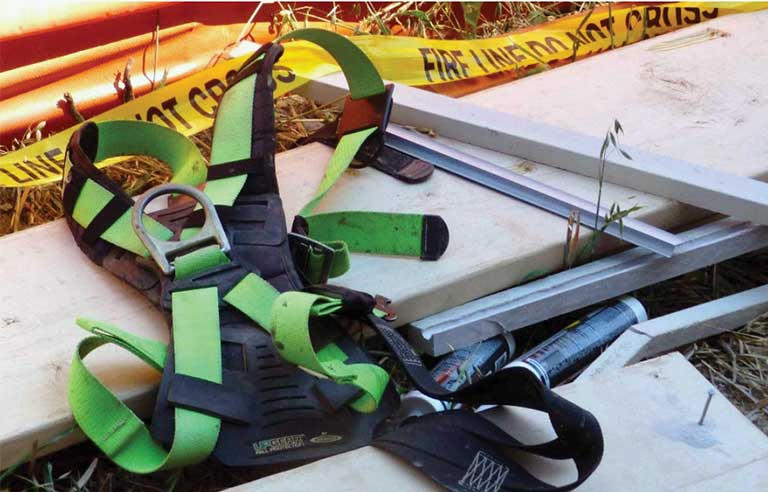 FACE narratives summarize work-related incidents and list recommendations and requirements that could have prevented them from occurring. In addition, they provide preliminary information about the incident, similar to OSHA’s Fatal Facts and the Mine Safety and Health Administration’s Fatalgrams.

An accompanying slideshow for each is available on the WA FACE website, along with a full library of narratives. The narratives are designed to be used as formal or informal educational opportunities so similar incidents can be prevented.

A 38-year-old siding installer who owned his own construction company was working for a subcontractor at a new construction apartment complex. On the day of the incident, the installer accessed the scaffold platform at the building’s third-floor level by climbing an extension ladder. The scaffold was not equipped with a guardrail system; it had only a workbench, which alone does not meet the requirement of a guardrail system. The installer provided his own full-body harness, but was not wearing it when the incident occurred. The subcontractor provided pump jack scaffolds and the rest of the personal fall arrest system, which consisted of a vertical rope lifeline with a rope grab and connector. The subcontractor required that site workers use the personal fall arrest system. As the installer was working from the scaffold platform, he fell 23 feet, landing on a pile of construction materials on the ground. He died of multiple blunt force injuries. Investigators found that all employees had received fall protection training. The site superintendent reported that he held weekly sitewide safety meetings, which included an emphasis on the requirement for workers to use personal fall arrest systems. In addition, he performed safety walkarounds once or twice a day to ensure that workers were using fall protection. On the day of the incident, he had not yet conducted a walkaround inspection. 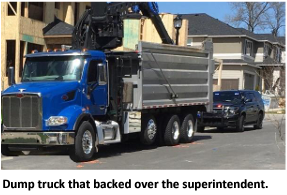 A 60-year-old construction site superintendent died when a dump truck backing up ran over him. He had 40 years’ experience and worked for a new single-family housing construction contractor.

On the day of the incident, the superintendent was in charge of coordinating and directing subcontractors and scheduling dump trucks to haul away construction debris. Two dump truck drivers employed by a solid waste recycling company were emptying dumpsters and hauling away the debris. While emptying a dumpster, a 5-gallon bucket of paint fell out and spilled on the street. The superintendent came over to organize the cleanup. He assigned one of the subcontractors to get sawdust to absorb the paint and told the drivers he was going to direct vehicles away from it. The drivers then entered their trucks to go pick up the next dumpster located close to the spilled paint. The trucks had to be parked side-by-side as the grapple on one truck needed to pick up the dumpster and empty it into the other. The driver of truck #1 drove out of the alley, turned right, and parked on the side of the street near the superintendent. The driver of truck #2 then turned left onto the street, drove forward, and stopped. He checked his mirrors and got a hand signal from the superintendent to begin backing up. As he was backing up, he lost sight of the superintendent and ran him over. The incident was unwitnessed. It is unknown why the superintendent was in the backing zone, or why the driver could not see him. 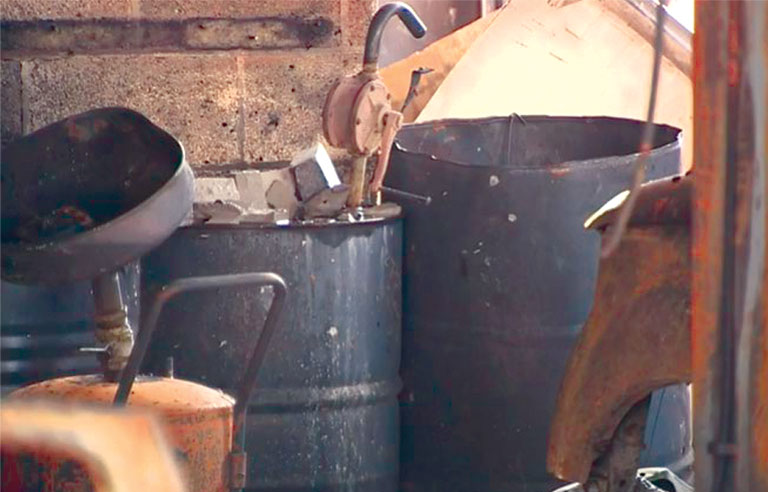 A 64-year-old automotive mechanic was working to remove the fuel pump from a car at his employer’s service garage. To accomplish the task, he was constructing a special tool using an oil filter wrench and other metal. The mechanic set up a temporary welding station on top of a 55-gallon steel drum that contained window washer fluid concentrate. The drum was nearly empty and had two bung holes in the lid. A co-worker held the work piece in position by extending his arm. To assemble the tool, the mechanic made a spot weld and was about to make another when the drum exploded and the top blew off. His co-worker, who suffered facial trauma and a burned arm, fled the garage as washer fluid vapors ignited and the fire began to spread. The mechanic was covered in burning fluid and was on the floor of the garage, underneath one of the vehicles. Other workers heard the explosion and gathered outside. Realizing the mechanic was still in the garage, they reentered the building to drag him out and used fire extinguishers to try to put out the flames on his body. His clothing eventually burned and was torn away to fully extinguish the flames on his body. Several people in the area heard the explosion and called 911. First responders arrived at the scene. The mechanic was treated at the scene and driven by ambulance to a nearby airport, then flown by helicopter to a regional Level I trauma center. He died six weeks later.